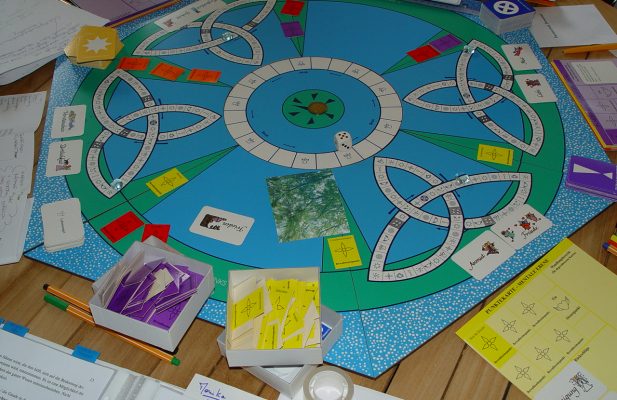 The Transformation Game is a self- discovery tool. It accompanies the players in their search, looking at a specific topic of the players’ choice from all the angles needed. Depending on the game unfolding, it could be that the players are invited to look at their objectives from four different levels: (i) physical, (ii) emotional, (iii) mental and (iv) spiritual.

For each of these levels, the players receive the information they need to progress on their path. The Transformation Game is composed of an individual dimension as well as of a collective one. It mirrors the real life dynamics of the players in relation to their focus and enables them to take a closer look at it and change what may need to change if so wanted.

How can the game contribute to your search?

The Transformation Game is a very flexible tool that can basically be used for addressing any question of interest to you. These questions can be related to a stress, a blockage, an attitude, a quality one wants to enhance or a question on which one wants to concentrate. Every player is invited to define two playing focus consisting of (i) an intention to give and (ii) an intention to receive.

The Transformation Game can be used to:

We organise regularly times to play the Transformation Game, a tool created in Findhorn and owned by Inner Link. It can last an evening, a day or a full week end. We propose the Transformation Game in three languages: German, French and English. We play generally with four players and occasionally with six. We generally play in one of our locations. We are also willing to come to you if you put up a group of at least three players.

Mindshift offers the game in cooperation with certified facilitators.

It consists of four parts.

In the week end set up, participants can also decide to join in our early morning meditation and body awareness practice.

It can be played over a day or a long evening. It contains all of the elements described above and is equally powerful.

There is no prescription of duration. What needs to be made as an experience by the participant will simply happen. Many people who have played a short version often like to try a week end version to also have the chance to deepen their understanding and have time to integrate the discoveries the Game allows them to make.

The Solo Transformation Game is very similar to the classic transformation Game. It focused on the individual playing it. Originally it has been conceived to be played without facilitation. Experience has proven that when the Solo Game is accompanied by a trained facilitator it is much more powerful. The game offers to the solo player a clear picture of the possible options for change. The Solo Game offers the possibility to refine the spiritual level in three additional level: intuitive level, love level and unity level. We offer to coach people who want to have an intense session on a personal goal.

The Solo Earth Game offers a framework for an individual to see the impact of one’s own actions on the Earth and the far reaching impact one’s attitudes and actions. It is a unique format to become aware of the personal role one can play in the evolutionary process of the Earth. The Earth is an evolving paradigm. In this game the Earth has its own unconscious represented through the cards that are part of its unconscious envelop. It helps strengthen the growing awareness that our actions impact the Earth and that the Earth has a response to offer to us. Each experience in the game is a chance for the player and the Earth to discover more of the interactions that connect human beings and the Earth. In the Earth Solo Game a playing focus is set both for the player and for the Earth. We offer to coach people who want to have an intense session on their intimate relation with the Earth and how they can be instrumental to the evolutionary process the Earth is going through.